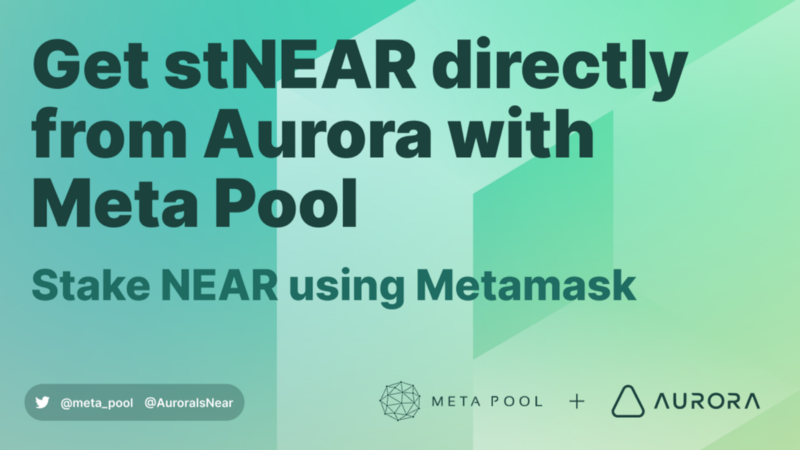 During our recent talk at ETHDenver a few weeks ago we presented our updated roadmap. One of the products we introduced is liquid staking directly on Aurora by using the Rainbow Bridge on the back end.

We are happy to announce that this feature is now live and users are able to stake wNEAR directly with Meta Pool from Aurora using Metamask.

Liquid Staking on Aurora is NEAR

Aurora is an Ethereum Virtual Machine (EVM) compatible blockchain built on top of NEAR. It leverages the best of both worlds with a familiar Ethereum experience, enabling developers to quickly build and deploy existing code while enjoying NEAR’s scalability and superior User Experience (UX).

The Aurora and NEAR ecosystems are highly composable thanks to the Rainbow Bridge which enables users to seamlessly transfer assets.

Ethereum developer experience, industry first user experience, affordable transactions and NEAR scalability have enabled Aurora to grow exponentially over the last few weeks as it continues to onboard more capital and users from other EVM compatible blockchains.

We are excited to have partnered with all the leading DeFi protocols on Aurora which include, to date, Trisolaris, WannaSwap, Bastion and Aurigami, with even more launching soon. These platforms have quickly accumulated over $1 billion dollars in Total Value Locked (TVL) and are increasingly providing options for stNEAR holders to participate in Liquidity Pools (LPs) and to use stNEAR as collateral on lending platforms. All $META rewards are now being distributed through these partner platforms, so there are very attractive opportunities to earn extra rewards.

stNEAR Core to DeFi on Aurora

As the DeFi ecosystem grows, demand for stNEAR is also increasing sharply. We are thrilled to see so many sophisticated and ambitious protocols incorporating stNEAR at the core of their offering as it solidifies its place as the best form of collateral.

How to get stNEAR on Aurora?

Up until now users could get stNEAR on Trisolaris or WannaSwap on Aurora or send assets over the Rainbow Bridge and stake directly on the Meta Pool app on NEAR Native.

We wanted to make it as easy as possible for users to obtain stNEAR — reduce all friction to maximise adoption.

With our latest release we’ve made it easy for Aurora users to stake wNEAR directly from Aurora using Metamask. Leveraging the Rainbow Bridge’s ability to do contract calls between Aurora and NEAR, we’ve built a simple solution that maintains the same user interface and experience as the NEAR native solution.

It’s easy to distinguish which network you are on as it has the Aurora logo, and each network will automatically plus it will prompt you to connect your Metamask wallet.

For the technically minded, these updates are quite exciting. NEAR is an extremely powerful blockchain and it is exciting to explore and continue to push the boundaries of what is possible. Most users can use the Rainbow Bridge to transfer assets between Aurora and NEAR, but few know that the Rainbow Bridge can also performs contract calls between Aurora, NEAR and even Ethereum — applications from these networks can talk to each other!

We are leveraging the Rainbow Bridge to automate all the steps the users would’ve had to perform manually: behind the scenes we are sending wNEAR from Aurora to NEAR Mainnet, unwrapping it, depositing NEAR on Meta Pool, receiving stNEAR and sending stNEAR back over Rainbow Bridge to the user’s Aurora Wallet.

This is the kind of powerful technology powering some very exciting announcements in the next coming weeks, so be ready and start staking today!

We are really excited to keep building on the Aurora and NEAR networks to create value on both protocols through our partnerships with DeFi platforms; soon we will be launching a new product that will enable anyone to support projects through liquid staking.

Built on the NEAR Protocol infrastructure, Meta Pool is the leading liquid staking solution for $NEAR holders to earn staking rewards and maintain their liquidity to participate in DeFi protocols on NEAR and Aurora.

stNEAR (staked NEAR) is the yield-bearing token handed to stakers to unlock the liquidity of their $NEAR staked on Meta Pool.

Stake $NEAR on Meta Pool

Go DeFi on NEAR & Aurora

With a TVL of $120 Million USD and growing, Meta Pool has become in just a few months a cornerstone element of the NEAR ecosystem, making it more decentralized and therefore more secure, as well as making $NEAR liquid.

In February 2022 Meta Pool has been successfully audited by BlockSec, confirming the implementation of the highest security standards. 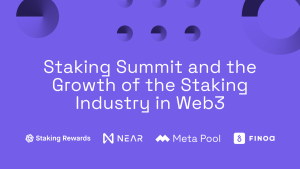 Staking Summit and the Growth of the Staking Industry in Web3 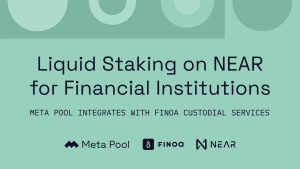